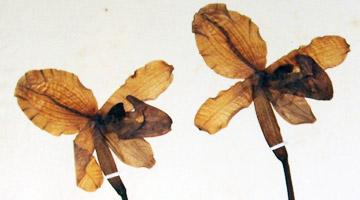 The cultivated plant collections are mainly derived from the herbaria of the Liverpool Botanic Garden and the University of Liverpool's Ness Botanic Garden.

The cultivated plant collections are mainly derived from the herbaria of the Liverpool Botanic Garden and the University of Liverpool's Ness Botanic Garden. The former herbarium is one of the most complete collections of cultivated vouchers from a Georgian botanic garden. There is also a significant element of cultivated exchange material, mainly from North American botanic gardens and arboreta. The collection is thought to contain numerous potential cultivar standards, which are the equivalent of type specimens for horticultural varieties.

Three collections are kept separately from the main herbarium on account of their historic importance and the significant number of type specimens each contains.

The Forster Herbarium was the foundation collection of the Liverpool Botanic Garden's herbarium, having been bought from Forster's widow in Halle by William Roscoe in 1799. It includes material collected on Captain James Cook's second voyage to the South Seas, including many types. Localities visited on this epic expedition included South Africa, New Zealand, New Caledonia, Vanuatu, Fiji and Tahiti.

The Roylean Herbarium a historic collection of plants from southern India and the Himalayas was bequeathed to the Liverpool Royal Institution by John Forbes Royle, Professor of Material Medica at King's College, University of London and formerly employed by the British East India Company as director of the Saharanpur Botanic Garden, India. The Roylean herbarium has been the subject of a major conservation project.

The Smith Herbarium was the second major collection to have been acquired by the Liverpool Botanic Garden, between 1806 and 1817. The main herbarium of Sir James Edward Smith is kept at the Linnean Society of London, which he co-founded in 1788. As a consequence of his friendship with William Roscoe, Smith sent around 5,000 specimens on exchange to the Garden, greatly strengthening the herbarium's worldwide coverage and including many hundreds of type specimens.

For more information on Smith visit the Linnean Society of London website.