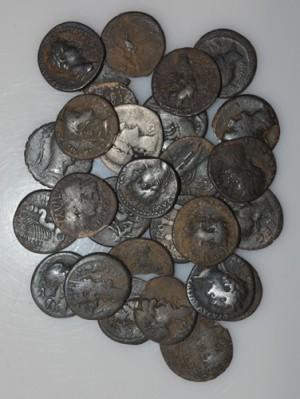 The Malpas Hoard is a group of 35 coins which were struck between 134BC and around AD50. It was discovered during a metal detecting rally near the parish of Malpas on 9 January 2014 and reported to archaeologists through the Portable Antiquities Scheme.

This is part of the Cheshire collection.

There are seven Iron Age British coins in the Malpas Hoard, made between AD20 and AD50. The Roman coins are early examples, struck before the conquest of Britain, and of the type that would have been in circulation when Roman soldiers arrived in Britain in AD43. The latest coin, a denarius of Tiberius (AD14-37) isn't very worn, which suggests that the hoard would have been buried within about ten years of the Roman invasion.

The seven Iron Age staters in the hoard are among more than 40,000 Iron Age coins which have been found in Britain. These are a mixture of those which are usually found in the western area, especially Gloucestershire marked 'EISV', and those from the east, Lincolnshire and Leicestershire, marked 'VEP CORF'. This mixture of coins from the two areas within one hoard is very unusual.

'EISV' western coins are usually associated with the Dobunni tribe, and 'VEP CORP' eastern coins with the Corieltauvi tribe.

While we don't know exactly who buried the hoard, they must have been fairly wealthy individuals. The coins would have been buried for safekeeping, as it was a time of political instability and uncertainty.