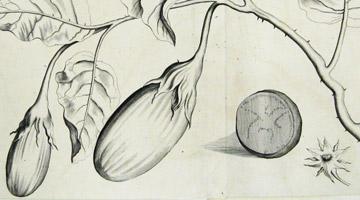 The collection holds a number of botanical prints including some of Hortus Indicus Malabaricus (1678-1703) which illustrates the medicinal flora in the Indian state of Kerala.

This is from the Botany collection.

The collection holds a number of botanical prints including some of Hortus Indicus Malabaricus (1678-1703) which illustrates the medicinal flora in the Indian state of Kerala.

The collection of original botanical drawings is small consisting mainly of watercolours. It contains a volume of watercolours of flowers by George D. Ehret entitled 'Deliciae Botanicae' (c. 1732). Other noteworthy drawings are the studies of Himalayan plants prepared by Indian artists, including Vishnupersaud, for John Forbes Royle at the Saharanpur Botanic Garden; an album of Chinese botanical drawings, thought to have been commissioned by John Reeves, from the library of the Earl of Derby at Knowsley Hall and an album entitled 'Twelve Posies Gathered in the Fields' containing paintings on vellum by James Bolton.

The museum holds extensive sets of 19th and early 20th century glass lantern slides, mainly of botanical subjects but with some topographic coverage. They include the collections of Conrad Theodore Green and Arthur Augustine Dallman.

The collection mainly comprises some 200 anatomical models of plants made by the Berlin firm of R. Brendel & Co in Germany around the turn of the 20th century for display and teaching purposes. Many have removable parts which reveal internal structures.

As each model is put together and painted by hand, each one is unique. The main material is papier mâché, but other materials are added to give detail and texture; including wood, cotton, glass beads and feathers.