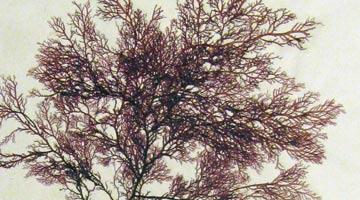 Cryptogamic plants are responsible for 84% of the worlds botanical diversity.

The cryptogamic collections are divided into 5 main areas:

Cryptogamic plants are responsible for 84% of the worlds botanical diversity.

The Algal collections at World Museum are an internationally important collection which holds historical material from the 18th, 19th and 20th centuries and is rich in type material. It is expanding its contemporary collections providing a unique and important timeline to the health of our seas.

They contain significant collections from Ross's voyage of the Erebus and Terror (1839-43) to the Southern and Antarctic regions. The collections contain the diatom collections of Waddington (1938-1943) which provide a unique baseline to examine climate change for the local area, providing an invaluable time capsule into the biodiversity and environmental status of the area. They also include the Liverpool Microscopical Society diatom collection (1868-1988).

The Algal collections also have a number of bound volumes such as the Thomas Velley (1748-1806) herbarium which consists of eight volumes of marine algae from the south coast of England, and dates from c1800 and J.R. Hulme's 'The Scarborough Algae' (1842).

The bryophyte collections have excellent coverage of temperate regions, especially British species. They contain historically important material from the West Indies and the South Pacific.

This collection consists of ferns and lycophytes (clubmosses, quilworts and spikemosses) they are seed free vascular plants that use spores to reproduce. The internationally important Fern collection has particular strengths in material from Sri Lanka and S.E. Asia.

The fungi collections consist mainly of British specimens dating from 1878 to present day. It includes fungi collected by J.F. Royle (1799-1858) from India and the current research collection of G. Greenhalgh containing bark and wood inhabiting Ascomycetes (Pyrenomycetes and Loculoascomycetes).