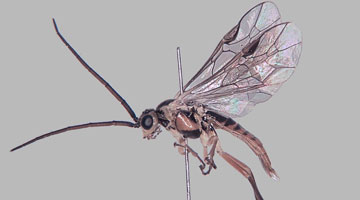 A collection of British and foreign insect collections and samples from biodiversity advisory surveys.

The British insect collections are a comprehensive reference resource for all major insect groups. They contain much contemporary material and are rich in biological data which supports and underpins contemporary wildlife conservation and biodiversity research. Areas particularly worthy of note are:

Foreign collections of particular note, in addition to those mentioned under historic collections, include:

Museum staff and associates regularly undertake biodiversity field surveys in partnership with various national and regional conservation organisations. This research informs species conservation and general site management. In the last fifteen years over 50, technical reports and publications have been commissioned and over 100,000 specimens have been identified. Specimens resulting from and validating this research are housed in the museum's spirit-preserved and dry invertebrate collections.

Please find attached further information on the World Museum Entomology facilities and the work of the Tanyptera Trust Project, which is based in the Entomology Section.Historic collections

Other notable historic collections include: